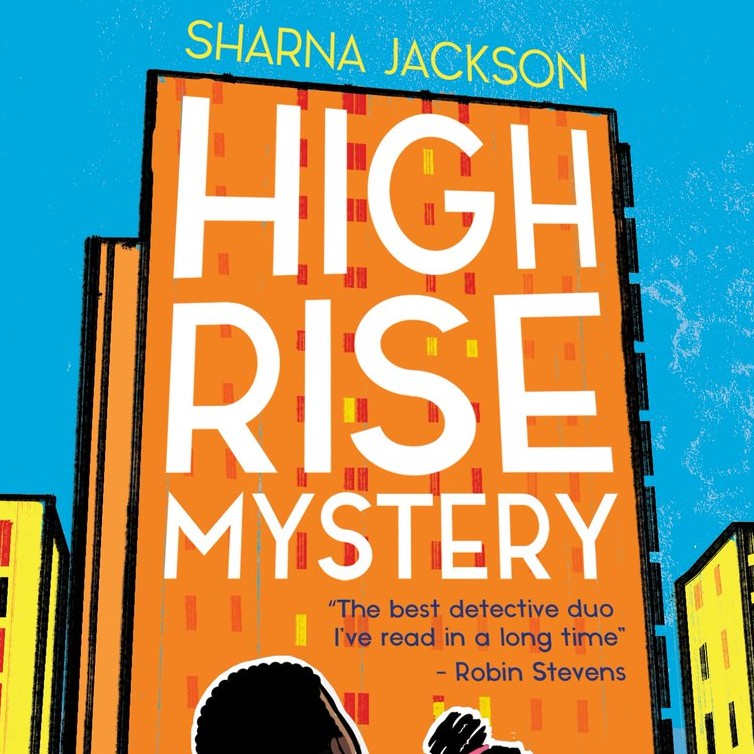 Nothing gets me more in tune with my inner child than a middle-grade novel. So, it was delightful to read Sharna Jackson’s triumphant debut, High Rise Mystery, which caused me to reminisce about my own childhood detective work, as a young, curious girl, meddling in her mother’s private papers.

In High Rise Mystery, Nik and Norva give Holmes and Watson a run for their money. The two sisters start an intense investigation after they discover the body of their community art teacher in the rubbish chute of their council estate block. Tensions heighten when their dad is arrested for the murder and it’s up to the duo to prove his innocence.

I loved the modern, confident voice of Nik and her relationship with Norva. I also enjoyed Jackson’s brilliant depiction of the urban landscape and the communities of people that live there.

Jackson’s characterisations of Nik and Norva are well rounded and refreshing. The two sisters are quite different, not only in age and appearance but in personality. Nik describes herself as ‘The Nut’ due to her analytical and logical way of thinking. Norva, on the other hand, dubs herself ‘The Gut,’ as she relies on intuition and emotional problem-solving. It was empowering to read that sisters’ differences were what made them a great team, instead of being a hindrance.

Jackson subverts classic detective fiction by setting High Rise Mystery on a council estate, known as The Tri, as opposed to the country houses and moors of the English countryside. This gives a window to a world that young readers may not have previously been exposed to. Rather than shying away from a negatively stereotyped setting, Jackson highlights the vibrancy of the communities that live on the estate through Nik and Norva’s wonderful and wacky neighbours. The reader’s interest will be piqued by the old and suspiciously strong Mrs. Kowalski as well as Charity Jane, the fundraiser-in-chief who continually pops up, seemingly out of nowhere. High Rise Mystery shows why depictions of urban life in children’s literature are important, as they reflect the realities of underrepresented demographics.

A recently published Reflecting Realities report from the Centre for Literacy in Primary Education reported that there has been an increase in the percentage of protagonists of colour from 1% in 2017 to 4% in 2018.  Although there is still a long road ahead concerning representation children’s fiction, High Rise Mystery is an indicator of progress made. Narrated by Nik, the novel provides young readers with a positive and contemporary representation of a young Black female protagonist.

It is heart-warming to know that there are authors like Sharna Jackson who are committed to representing modern and multifaceted Black British female characters.  I could not be more excited for Nik and Norva’s next adventure on the Tri estate and hope that there more laughs, more drama, and, of course, more mystery!

**This is a payment page only. Please use this page to make payments once we have accepted your manuscript.**

To find out more about our manuscript assessments please go to https://www.rewritelondon.com/manuscript-assessment-4/