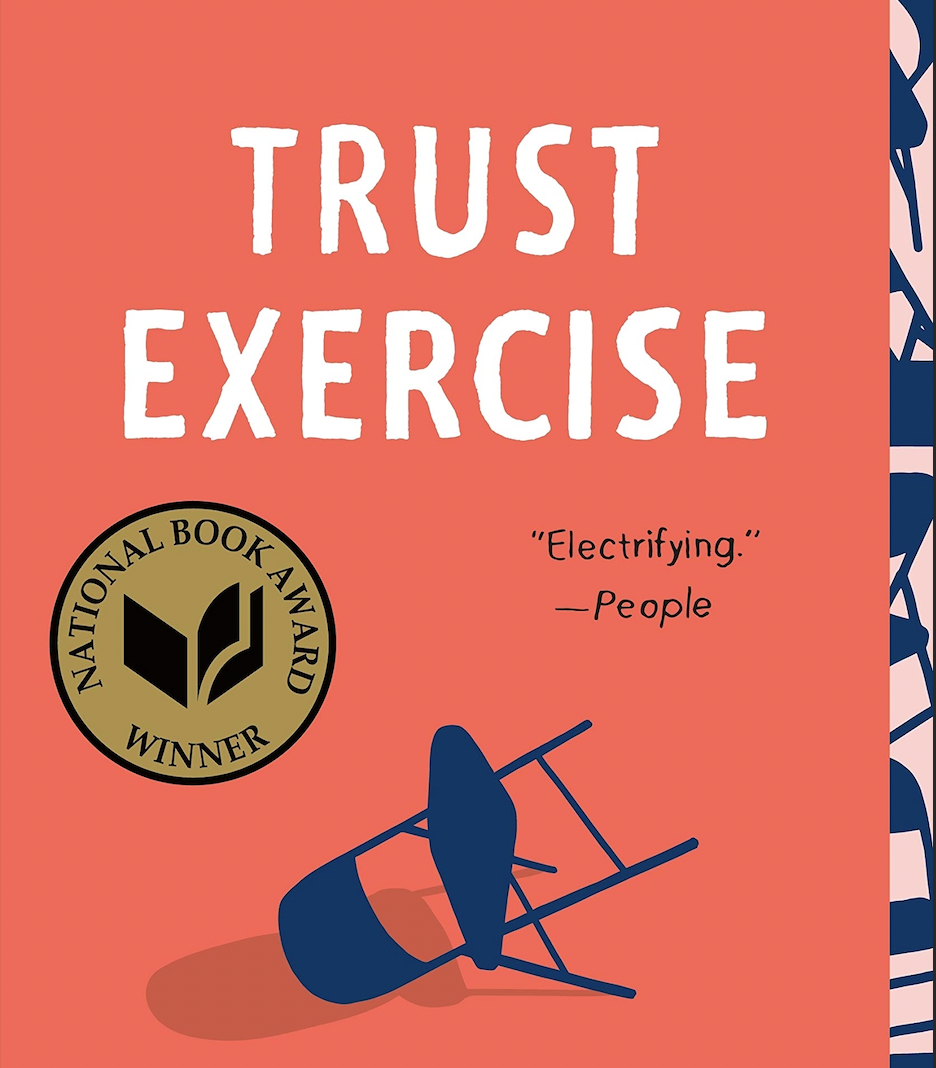 Trust Exercise by Susan Choi is a novel in three acts. The performance within is one of the teens in an orchestrated rendition of adulthood. Choi introduces us to the students of the highly competitive Citywide Academy for the Performing Arts (CAPA). What initially reads as a straightforward story from our first narrator’s point-of-view turns into a dissection of the true repercussions of unchecked imbalances of power, especially for adolescent girls.

In the first act, we meet our narrator, high school freshman, Sarah. We explore various aspects of her life, including experiences with her family, at school, with her schoolmates, as well as her love interest, David. It is through Sarah’s interactions with David, and the dynamics of their relationship, that the events of the first act are contextualized. Through Sarah and David, we discover a rift that plunges us into the hidden tension that exists within the class; a rift that is perpetuated by their theatre teacher, Mr. Kingsley.

Through the first act, Mr. Kingsley’s predatory actions and manipulations become glaringly clear. He breeds malignant behaviour and sows discord among the teenagers by singling out specific students as his favourites and exploiting secrets that his students have confided in him.

In its second act, the narrative sets its compass to a new North. Here, the story is now told from Karen’s perspective, a fellow student often at the periphery of Sarah’s narrative. In this act, Karen gives her recollection of the events that occurred at CAPA 15 years earlier. Through Karen’s narration, Choi deftly demonstrates the distortion that naturally occurs when stories are told from a single point of view – what happens when you ignore how much a presented reality is shaped by the person telling the tale. Through this shift in narrators, we are introduced to someone who felt erased from, what they believed to be, their story as well.

We also see a new side to Sarah from someone who was watching closely whilst dealing with their own “Mr. Kingsley.” While Karen gives a different account, whether Karen’s depictions of events then and now can be seen as accurate or even reliable is questioned throughout the second act as it becomes obvious that most of her narrative feeds off of and is in response to Sarah’s. It is a performance to regain control of her own trauma.

Here, we also explore the roles adults, other than Mr. Kingsley, played in the student’s premature push to adulthood. Often complicit through their non-involvement in their children’s lives, many of the parents go unaware of the traumas that happen to the students as well as their regrets, and their misshapen understandings of the world around them. For example. in order to cope, we repeatedly see the students declare that they were not, in fact, preyed upon and insist that they are equals to their predators.

The final act is not a definitive conclusion and is not an attempt at resolution. In it, we are introduced to a new narrator. Though the time and names have changed, many things are familiar. It is a reprise that demonstrates how the blurred lines of consent and coercion prevail, especially for young girls and women, in seemingly harmless environs.

Through the passage of time and “passing of the mic,” Susan Choi forces us to pay attention to the ways in which we protect predators, whether actively or passively. She also depicts how institutions, practices, and the pretence of prestige not only support and protect abusers but create a breeding ground for behaviour that puts young people, particularly young girls, at risk. This is a story about lives that are ruined by a man with too much power. Its multiple narratives do not function to invalidate any character’s experience. Instead, the different perspectives and experiences in Trust Exercise, though never told the same way twice, are the same story about abusers and the harm they inflict on women and girls over and over again.