Book Review: Slay In Your Lane 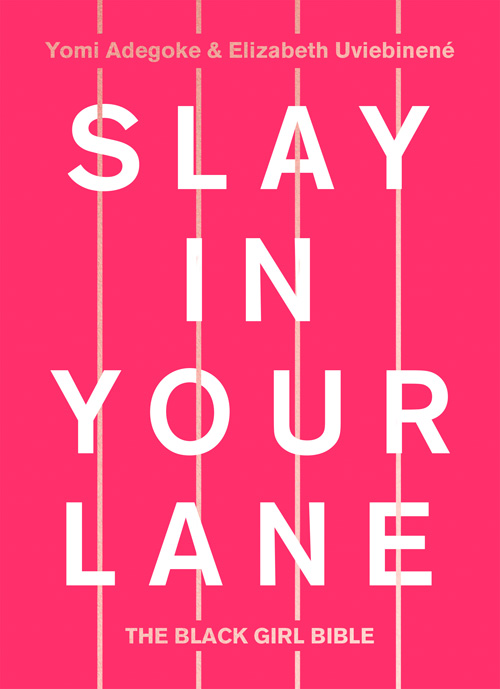 Slay in Your Lane: The Black Girl Bible by Yomi Adegoke and Elizabeth Uviebinené

‘I sought advice where so many women do: in books. I bought Sheryl Sandberg’s “Lean In”, and although there were parts that I learned from and related to, I felt it failed to address the uniquely challenging experiences faced by me. And why wouldn’t it? Sandberg can only speak to one facet of my being, my womanhood, which, for me, is wholly intertwined with my identity as a black woman.’  – Elizabeth

In the last year, there have been a number of books playing a crucial role in creating the much-needed space for frank and honest conversations around race and inequality in the UK. Think Akala’s ‘Natives’, Afua Hirsch’s ‘Brit(ish)’, Reni Eddo-Lodge’s ‘Why I’m No Longer Talking to White People About Race’, and Nikesh Shukla’s ‘The Good Immigrant’. As important as these books have been, being a Black woman in her early thirties living in Britain – who is still trying to figure out what exactly she is doing in many different facets of her life – I have been most curious to read ‘Slay in Your Lane’). Would this book, written by two young, black British women for black British women resonate with me? More important, would I be inspired?

In ‘Slay in Your Lane’, friends Yomi Adegoke and Elizabeth Uviebinené grapple with issues around education, work, getting ahead, representation, dating, and health that are specific to black women’s experience. In it, they provide practical advice to help Black women successfully address these areas and the best ways to forge their own paths. This is important, particularly as Black women do not face a ‘glass ceiling’, but an ‘impenetrable glasshouse’ in the workplace, and in the world of dating are often ‘at the bottom of the pecking order of women objectified by men of their own race’. This book is extremely well-researched, which is a strength – as it draws on statistics and data to support the key arguments made.

Throughout ‘Slay in Your Lane’ Elizabeth and Yomi weave their own experiences – in an extremely honest way – with those of 39 successful and accomplished Black women in Britain they interviewed for the book. These 39 Black women – who share their own perspectives on success in the six key areas of focus of the book – cut across a variety of industries, including acclaimed author Malorie Blackman, renowned publisher and editor Margaret Busby, BAFTA Award-winning director Amma Asante, and Olympic gold medallist Denise Lewis. ‘Slay in Your Lane’ gives young Black girls and women a host of role models to know what is possible, and by highlighting these different sectors, that it is also possible as a Black woman to occupy so many different spaces.

I found myself nodding in agreement at various points while reading ‘Slay in Your Lane’. An example is when Dr. Maggie Aderin-Pocock explained that her choice of tactic in work situations is to take an ‘educative approach’. I nodded, as I too – in similar situations – have chosen to educate people who are often confused by my presence in certain (academic and policy) spaces. Dr. Aderin-Pocock used the example of when she studied for her PhD and was mistaken for a secretary. She did not get mad at being called a secretary – as she stated clearly ‘there’s nothing wrong with being a secretary’ – but the assumption that because she was Black and a woman she could not be anything else. Her response, ‘Oh no, you’re mistaken, I’m not secretary at all, I got my degree at Imperial and now I’m doing my PhD’. Dr. Aderin-Pocock chose to educate so that the next time someone sees a woman like her in an academic space (and I would say any other space), their first response is not one of confusion or uncertainty, but one of realisation that there are many black women that can occupy any space – from academia to politics to film-directing.

‘…black British women in 2018 are well past making waves – we’re currently creating something of a tsunami.’ – Tomi

‘Slay in Your Lane’ makes visible the Black women in Britain, who in spite of the challenges they face and odds stacked against them, are movers, shakers and shapers in almost every sector of society. It celebrates Black women’s many achievements. Reading this book makes me extremely proud to be a Black woman of Nigerian and Kittian heritage living in Britain today, as I am able to see what the Black women that came before me have achieved. It also gives me hope of what Black women like me can achieve, and what the younger generation of Black women will achieve. I do not say this lightly when I say this is essential reading for Black women of all ages. I will even go as far as saying essential reading for non-Black women to be able to get a sense of what it means to be a Black woman in Britain today.