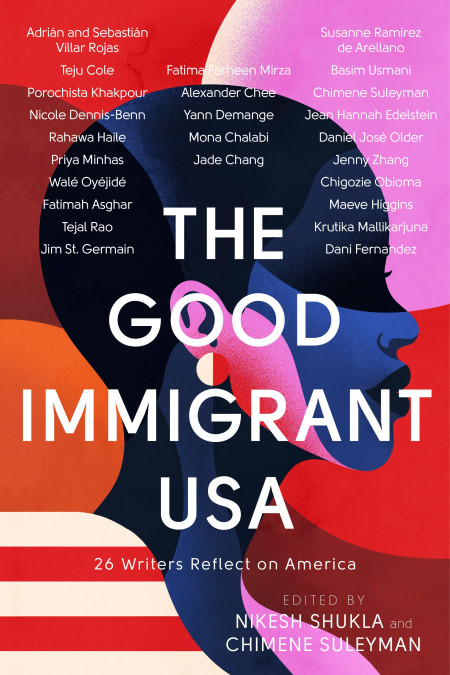 After the success of The Good Immigrant edited by Nikesh Shukla (2016), which explores the Black, Asian, and Minority Ethnic (BAME) immigrant experience in the United Kingdom, Shukla and contributor Chimene Sulyeman then shifted the focus to the United States. The result was the anthology The Good Immigrant USA: 26 Writers Reflect on America. A collection, which examines and provides personal stories of the immigrant experience in the US – a perspective urgently needed during a time when an overtly, proud xenophobic and racist presidency dominates such a large part of the mainstream narrative around immigration. The powerful collection of essays in The Good Immigrant USA touch on a number of important topics. Two overarching themes are identity & assimilation and sense of belonging.

The majority of the essays in the collection, touch on, if not center on, the issue of identity and assimilation. The pressure to assimilate to the dominant white American cultural norms was a survival technique, one that takes on many different forms. For example, Dani Fernandez writes about how, at her father’s insistence, she and her brothers were only taught to speak English at home even though their older family members spoke Spanish. She writes, “English was the prize. Learning it was not optional. It was the one thing we needed to survive, to fit in”. In the opening lines of Porochista Khakpour’s contribution How to Write Iranian-America or The Last Essay, she powerfully recalls how she attempted to discard her identity as an Iranian-American in her writing by declaring that the way to begin writing about Iranian-America is “by writing about anything else”. Similarly, Nicole Dennis-Benn recounts her Jamaican father’s advice to her upon starting university, “Know yuh place, keep quiet, an’ work hard”. Each of these involves giving up one’s voice, whether by foregoing one’s own language or telling anyone’s stories but your own.

Fernandez and Priya Minhas both painfully retell attempting to physically alter their bodies to fit into the white, blonde hair, blue-eyed ideal standard of beauty in the US. Fernandez discusses developing Anorexia and Bulimia in high school after being bullied for her natural body type.  Similarly, Minhas writes, “Fitting in, it turns out, is a very physical process. I have spent years in a battle with my body, trying to make it compliant to the needs of others. I have tried to shrink it as though I could shrink my difference. Am I more welcome if I take up less space?”

Despite these attempts to make themselves more palatable for the dominant white culture, the writers still found themselves other, tokenized, and discriminated against. This begs the question as to whether or not their efforts to assimilate, their loss of self and identity, and self-loathing was worth trying to gain the acceptance of the broader society; and if that was, in fact, something that could ever be achieved? The writers in this anthology seem to have found their voices and comfort in their identity. When discussing learning what Black means in America and the diversity in Blackness Teju Cole asserts, “Those who have to learn Black also expand what Black can be … Next person comes along to learn Black will have to learn me too”.

In addition to not fitting in socially, the lack of a sense of belonging is another prominent theme throughout the anthology. Many writers spoke of being both American and not American, but not enough of either, and having difficulty feeling a home anywhere. Fatimah Asghar writes, “I both belong and don’t belong to America. When I’m in America, I’m constantly reminded that I’m not actually from here … But when I’m abroad, I feel the most American I’ve ever felt”. Rahawa Haile references The Good Immigrant’s daughter, The Good Daughter, “Recently, a man from her country (Eritrea) killed himself after being denied asylum by her country (America)”. This lack of a solid sense of belonging is rooted in a lack of acceptance, despite all attempts to assimilate, stay connected to one’s roots, or create multiple selves to accommodate their multiple lives, leaving first and second generation immigrants to wonder if there is a physical place for them – if there exists a welcoming home.

The United States’ 45th president is an unapologetic xenophobe; he ran his campaign on the promise that he would build a wall between the United States and Mexico in order to keep out the “bad hombres” – the rapists, the criminals – and he enacted a Muslim ban suspending travel to the US from seven Muslim-majority countries. In its current iteration, the ban limits travel to the US from five Muslim-majority countries (Iran, Libya, Syria, Yemen, Somalia) along with North Korea and Venezuela. During a time in which such divisive and hateful rhetoric dominate the social consciousness of the US, The Good Immigrant USA provides a powerful reminder that immigration is not just a theoretical, abstract social policy or a political talking point. According to the UN’s International Migration Report, in 2017, 258 million people migrated internationally.  Immigration is hundreds of millions of people moving from their countries of origin for an untold number of reasons, including safety and the hope for a better life. The Good Immigrant USA gives voice to the reasons for immigration, the challenges of immigrating, and the multitude of difficulties thereafter. It is my hope that The Good Immigrant USA illuminates not only the hardships of first and second generation immigrants, but also their joys, and that it inspires compassion and understanding in a time in which it is so desperately needed.