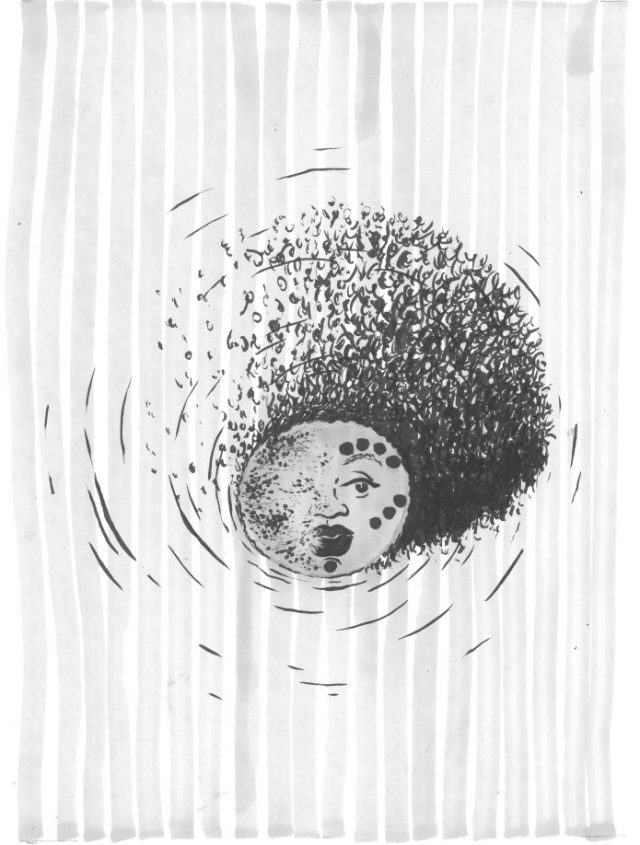 “Will those facts look after him when he gets sick? Would he burn books to make a fire or rather freeze to death•”

Keisha Thompson is a Mancunian writer, performance artist and producer. Her debut book, Lunar, is made up of a poetry collection and the script for her award-winning play Man on the Moon. Whilst both works focus largely on Keisha’s relationship with her father, Lunar evocatively explores a number of themes and emotions.

The use of symbols in Lunar, some of which are mathematical symbols, and visualizations are particularly intriguing; the collection even begins with a glossary. For example: ‘^’ is a symbol for ‘and’, and ‘Ǝ’ is a symbol that means “there is at least one”.

The poem Noughts ^ Crosses, recounts a painful conversation between Keisha and her father through a game of noughts and crosses (tic-tac-toe) accompanied with narration for each move, adding an intensity and a sense of desperation that a young Keisha must have felt in those moments. She uses Venn diagrams and line charts in pairs or groups for comparisons in perspectives. For example, included in the book is a pair of poems that are written on line graphs controlling for time entitled, “Divorce According to Mum” and “Divorce According to Dad.” The use of visualizations and symbols make for a distinctive and thought-provoking poetry experience.

Man on the Moon

While Lunar utilizes symbols, visuals, and touches on numerology, Keisha’s one woman show, Man on the Moon, relies more heavily on storytelling through flashbacks, song, as well as a stronger emphasis on numerology to expand on her relationship with her father; her attempts to make sense of their relationship, and her attempts to make sense of him.

The use of symbols in Lunar, some of which are mathematical symbols, and visualizations are particularly intriguing;

Keisha struggles to make a two-hour trip to Longsight via multiple buses and through crowded markets in order to meet her father before his midday prayers. Along the way, she gives the audience more insight into her father. She recalls stories she has heard about her him, including her mother’s embarrassment as he revealed he converted to Islam to her mother for the first time at Keisha’s Christening. She also relays her own memories of her father, such as facing him for the first time after discovering he has been physically abusive to her step-mother. She also conveys her fears: that while her father was never a consistent presence in her life, it is she who has not been a vigilant enough of a daughter, that she has not checked in on him frequently enough, and now something terrible may have happened to him.

It is a testament to the difficulty, and perhaps inability, to abandon loved ones who have not always, or have never, been loving in the ways we have needed them to be.

Despite his intermittent presence and the pain he has caused, Keisha shows the strength of familial bonds and the desire for her father’s love and approval through the efforts she’s willing to go to reach her father; the depths of the despair she feels at the prospects of what may have become of him; and the tenderness and care with which she picks out which soups and teas she will bring to him on her visit.

Lunar is a display of immense creativity and talent that successfully submerges the reader in the pain and confusion surrounding the author’s relationship with her father; the reader sits in it, feels it, and experiences it, in the moment, not in a clear-headed, wise reflection. It is a testament to the difficulty, and perhaps inability, to abandon loved ones who have not always, or have never, been loving in the ways we have needed them to be.