Sista! An anthology of writings by Same Gender Loving Women of African/Caribbean descent with a UK Connection 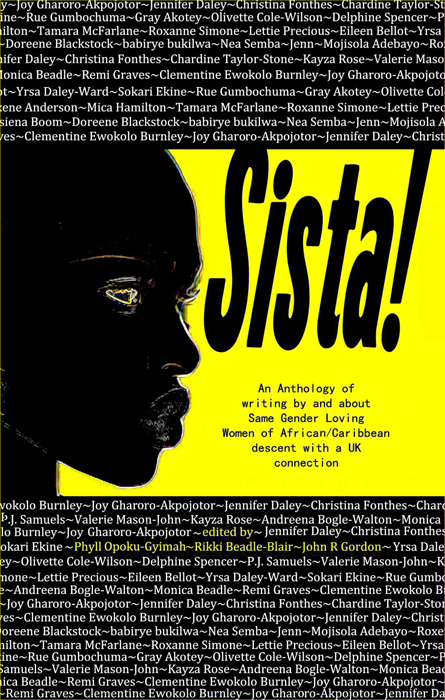 SISTA! An Anthology of Writing by and about Same Gender Loving Women of African/Caribbean Descent with a UK Connection

“For Black women, existing virtuously as ourselves is an act of protest. We defy age-old prejudicial conventions; we embolden each other without applying age-old prejudicial censorship. Be loud, be brazen, and dare to be something distinct and unprecedented until it becomes the norm.”

Sista! Offers a unique perspective on the experiences of African and Caribbean women who find themselves situated in the UK as first or second generation immigrants. The anthology explores the typical themes that we often find in the experiences of same-gender-loving people, such as family dynamics and stories about ‘coming out’. But the anthology also provides a fresh twist to the stories of the women featured; one in which the women not only grapple with matters of acceptance and belonging within their Black communities, but also find themselves face-to-face with the question of how racial relations affect their place in the larger UK society. Refreshingly, the personal accounts interspersed with poignant poetry and fiction lends a unique aspect to the collection.

White supremacy makes it so that Blackness is the farthest and most unrelatable thing to the white mind. Queerness is a more likely reality than Blackness, as even white people can be queer.

Considering the fact that this anthology deals with African and Caribbean families in the UK, as well as families with one African and/or Caribbean parent and one white parent, the reactions to coming out are varied. The spectrum ranges from African/Caribbean parents who are wholly unaccepting on the one hand, to African/Caribbean parents who are wholly accepting (some of them are even same-gender-loving themselves). Ironically, white parents pose more of a threat to these women when it comes to acceptance of Blackness, and less when it comes to acceptance of queerness. All these categories require some unpacking.

The experiences with unaccepting parents in Sista! range from the mundane to the jarring. One of the contributors, Nea Themba, confesses to playing cat-and-mouse games with their mother, with the latter jokingly asking often whether Nea was a lesbian and the former always denying it. Eventually, Nea says that she figures her mother always knew and, in that way, the most that was encountered between them and their parents was a thickness in the air that would dissolve with a change in a conversation. Christina, however, was not so fortunate. On a trip to her country of origin, Congo, she found herself stripped of her passport and essentially held without her consent by her mother. She details how difficult the path to forgiveness was, and how ultimately love won over whatever beliefs and resentments both she and her mother held in the aftermath of the incident.

One thing that stands out for both Black and biracial women is their relationship with their hair; how it is a tool of communication as well as a sign of their identity

A few women in the anthology are themselves parents, and so we get a perspective on how different it is to approach the topic of being same-gender-loving with children, whether they be same-gender-loving themselves or not. In a beautiful interview with her gay son, Monica Beadle shares what it was like coming of age as a same-gender-loving woman in London, discovering her attraction to women and getting accepted into gay and lesbian clubs where people became their true selves under these safe spaces. It is no wonder then that, when her son comes out as gay, she proves to be both accepting and unafraid, falling back on her own experience and knowing that her son will be just fine. Kayza Rose chronicles her experience with telling her twins that she is same-gender-loving, and watching one of them grapple with this reality, and eventually accepting it as children do. Her experience is a reminder that the biases and isms that adults hold against those they consider to be different to themselves are far from inherent, but are instead learned, and that it would do the world some good to learn acceptance from its own children rather than to teach them hate.

Finally, white parents seem to grapple more with their children’s Blackness than their queerness. This flows into discussions of what it means to be Black in a predominately white society. White supremacy makes it so that Blackness is the farthest and most unrelatable thing to the white mind. Queerness is a more likely reality than Blackness, as even white people can be queer. And so, as one contributor – Kesiena Boom – notes, it is more difficult to bring up conversations on Black as, as was her case, her mother was wholly uncomfortable with the topic as well as the idea that her own children are Black. So, in the same way that some parents are unwilling to learn about their children’s queerness, some others are unwilling to learn about their children’s Blackness.

Navigating through whiteness as a queer woman

The conversation on white supremacy spills over into issues related to navigating the white space. An overwhelming sentiment throughout the book is that being a Black woman in the UK requires, first and most importantly, reckoning with the fact that you live in a white society and face constant microaggressions. Add being same-gender-loving to the mix and the dynamic becomes even more complex; ever more difficult. One thing that stands out for both Black and biracial women is their relationship with their hair; how it is a tool of communication as well as a sign of their identity. Whether it be wanting ‘good hair’ or trimming it, much to the chagrin of those who envied it, many of the women in the book had to come to terms with what it meant to be, quite literally, a Black woman with hair on her head. These ideas and thoughts naturally stem from white supremacist ideals that render afro hair as unattractive, even to Black women, and hold up less coarse hair as being the ideal that all should aspire towards. With queerness factored in, these women have to be careful not to adopt hairstyles that mark them as lesbians, or, on the other hand, adopt specific hairstyles with the very aim of marking themselves as such. To the Black community, hair is political.

In a beautiful interview with her gay son, Monica Beadle shares what it was like coming of age as a same-gender-loving woman in London, discovering her attraction to women and getting accepted into gay and lesbian clubs where people became their true selves under these safe spaces.

Ultimately, Sista! continues to show us that to be Black, female and same-gender-loving is to be radical. This cannot be escaped. From the home front, where the women have to come to terms or grapple with homophobic families, to outside with the rest of the world, where racism, sexism and homophobia pose a threat to the queer, female, Black body in all its various forms, these women must form a resistance to protect both themselves and their communities. Phyll Opoku-Gyimah, Co-founder of UK Black Pride and a key figure in the resistance movement of LGBTQ+ people of colour in the UK, touches on this by lamenting that an ideal world is one where a (Black) Pride would not be needed because all would be accepted by all.