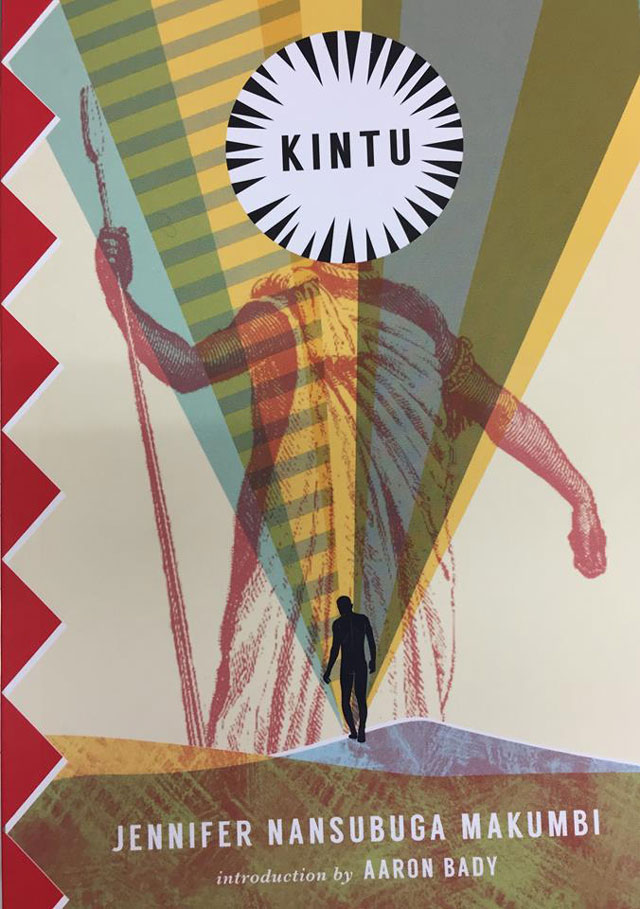 “Looking at him now Kanani decided that Miisi was disturbing. That seamless marriage of heathenism and intellectuality was unnatural. Westernisation erased heathenism in Africans; the humility that Miisi possessed came only with Christ’s saving grace. Only the Great Deceiver could combine the two.”

Jennifer Nansubuga Makumbi’s Kintu (pronounced Chin-too) has, this year, made its mark in the UK. Having first been published in Kenya in 2014 by Kwani Trust,  Kintu did not garner much international buzz outside of East Africa. But now Makumbi – who was awarded a $165,000 Windham-Campbell Prize – has finally made her international arrival with this epic tale of Buganda life and living. Kintu is an exposition of Buganda cultural beliefs as they span from the precolonial period to the post-colony, told through the story of one family.

Like several other great African novels before and after it – one calls to mind Tsitsi Dangarembga’s Nervous Conditions and Roland Rugero’s Baho! – Makumbi’s novel opens with a picture of death. The death of Kamu Kintu sets the book in historical motion, taking the reader on a journey through the history of Kamu’s people that will lead us to the present day. It is clear from Makumbi’s writing that family is an integral part of Buganda society and that, even when family members are far removed from each other in distance and in time, their histories and blood relations tie them inextricably together in spite of whatever differences may be present amongst them. Hence, the sins of Kintu Kidda, the first member of the Kintu family that we meet in the book, carry on from generation to generation until a final resolution is made.

Having first been published in Kenya in 2014 by Kwani Trust, Kintu did not garner much international buzz outside of East Africa

But what form exactly does this resolution take? The sins of Kintu Kidda bring alive a curse that manifests itself in mental insanity in both Kintu and his wife Nnakato. Sudden and unexpected loss of life can be traced back to more than just coincidence and ill health. But several centuries later, with the advancement of medicine and knowledge on mental health, Makumbi excels at the impressive fete of relating this medical knowledge to traditional histories. Miisi, arguably the most educated of the Kintu antecedents, finds himself afflicted with the same mental illness that his ancestors before him suffered. One would expect that a foreign educated man would surrender himself to the best of modern medicine, but Makumbi instead uses Miisi as a tool to communicate that the modern and the traditional can in fact coexist. With the help of a Cambridge-educated spiritual medium, the family works to slowly resolve its fractured past and create a more united future.

Makumbi’s method of writing leaves no room to imagine that she is embellishing Baganda culture, and so it came as a pleasant surprise to read passages that openly discuss Baganda ideas on sex and sexuality. The first part of the book, set in the 1700s, when Kintu Kidda is Ppookino (leader) of Buddu Province takes us through the norms of the people of Buddu, with special interest placed on sex and sexuality. While the men of the village prepare Baale, Kintu Kidda’s son, for marriage, they talk about sex in order to educate him on what is expected of him as a husband. But while doing so, they are sensitive and aware that not all men are sexually or romantically attracted to women. One of the elders tells the story of a man who, finding himself incapable of consummating his marriage, turned to his brother to help him sire children with his wife. When Baale questions how this came to be, he is informed rather matter-of-factly that some men are attracted to fellow men, while others are asexual.

Centuries later, Miisi debates with himself on what happened to the Buganda; when they happened to lose their nuance on sex and sexuality.

Makumbi’s method of writing leaves no room to imagine that she is embellishing Baganda culture, and so it came as a pleasant surprise to read passages that openly discuss Baganda ideas on sex and sexuality

Miisi understands that much of the homophobia that exists in present day Uganda is an import that arrived with Western religion. He finds himself an outcast in his ideas, as a non-believer in either Christianity or Islam, and therefore incapable of truly discussing his feelings on the matter with his peers.

Makumbi’s foray into the discussion of Ugandan morals is indeed a rather brave one, considering that Uganda is amongst one of the States in Africa with the most stringent anti-homosexuality laws and attitudes. But once again, she tackles this issue with great sensitivity and nuance, and shows us, through the experiences of both the religious and non-religious members of the Kintu family, that not everything is as straightforward as we would like it to be. Our experiences and education mould who we are and influence our beliefs.

Reminiscent of Yaa Gyasi’s Homegoing, Makumbi uses the passage of time to build a story that culminates in the triumph of the current generation. But what makes Kintu particularly unique is how it approaches its various topical areas, with as much naturalness and ordinariness in discussion of Baganda traditional culture as would be expected of a book written within the more readily accepted Western traditions. Makumbi does not turn to the traditional as the source of an unfamiliar and distant past, but rather as an ever-living present.